How has the number of people reporting no religion changed over time?

The number of people reporting no religion in Australia has increased substantially over the past hundred years, from one in 250 people to one in three. In 1911 there were 10,000 people (0.4%) who chose the option ‘No religion’ on their Census form; in 2016 there were over 7 million (30% of Australians). As a single response to the question on religion, No Religion was the highest, followed by Catholic at 23% of the population, with Anglican third highest at 13%. 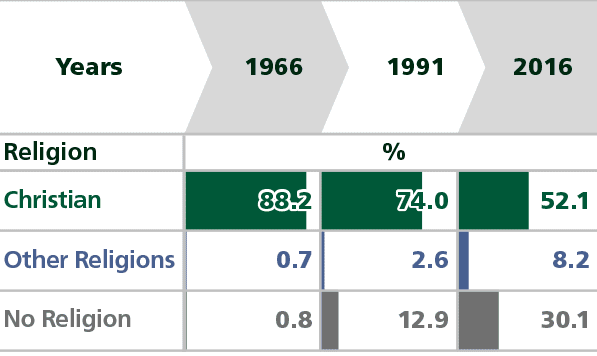 Most people who reported no religion selected the ‘No religion’ box on the Census form (98%) in 2011, however some provided additional information about their views, including the belief that a god or gods do not exist (Atheism), or cannot be proven to exist (Agnosticism). Other responses included Humanism, which rejects religious beliefs and centres on humans and their values, capacities, and worth; and Rationalism, which states that opinions and actions should be based on reason and knowledge rather than on religious belief or an emotional response. There was no provision for sub-categories in the 2016 Census and there is no benefit in specifying sub-categories in 2021.

Leading up to the 2016 Census, there was a campaign by various non religious groups which encouraged people to report ‘No Religion’ on their Census form (a campaign that was also carried out in New Zealand and the United Kingdom).

Does Age and Education make a difference to those reporting no religion?

Young adults (aged 18-34 years) were more likely to report not having a religion (39%) and more likely to be affiliated with religions other than Christianity (12%) than other adults.

Older people, particularly those aged 65 years and over, were most likely to report Christianity (70%).

The religious pattern of those under 18 is most similar to the 35-49 year olds, suggesting the form may be completed with their parents’ beliefs.

Rates of reporting no religion increase with higher educational qualifications. In 2011, almost a third of people aged 20 years and over with a postgraduate degree reported no religion (31%), compared with a fifth (20%) of those with a school education only.

Education levels were not as related to rates of reporting no religion for younger people as they were for older people. There was no difference between people aged 20-34 with postgraduate or school-only qualifications (both 32%), however people aged 50 to 64 years with a postgraduate degree were twice as likely to report no religion (32%) as those with a school education only (16%). This difference was even greater for people aged 65 years and over (31% and 9% respectively).

Source: The Australian Bureau of Statistics article LOSING MY RELIGION?