The Rationalist Society of Australia has recently released a landmark report providing a detailed summary of religiosity in Australia.

The census data charts the progressive decline of Christianity as a defining demographic characteristic of Australian society. 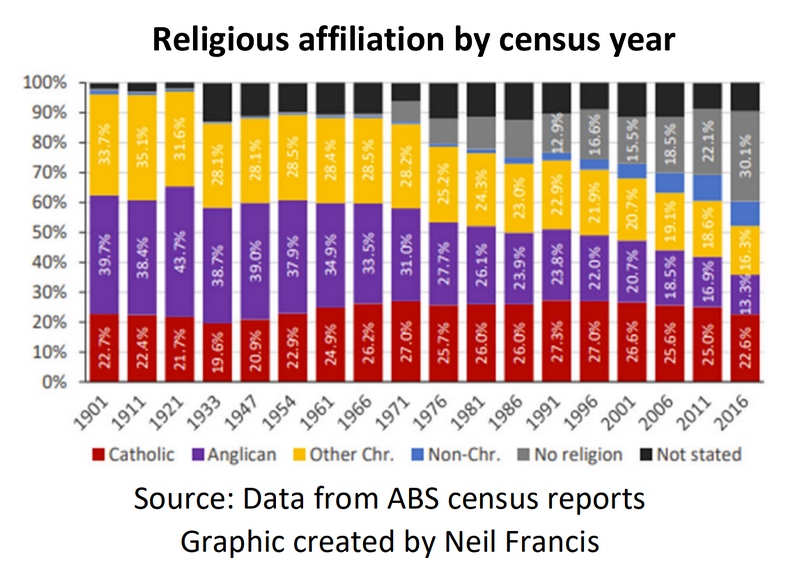 From its post-WW1 peak of 97% to just over 52% in 2016, the decline, particularly in non-Catholic Christians, has accelerated markedly since the mid-1970s.  Conversely, the largest growth over the same period is attributed to those who choose not to identify as religious.

The ‘No Religion’ choice in 2016 census was, by some margin, the largest single category in the Australian Standard Classification of Religions – hence, the ‘No Religion’ option is positioned at the top of the listed categories.

But it is almost certain to be a significant understatement of the non-religious in Australia.  The report’s author, Neil Francis, highlights several reasons for this anomaly:

Privacy – It is normal for one person to complete the census on behalf of others in the household.  In many circumstances, this will compromise the accuracy of answers on sensitive questions, including religion.

Question wording – The question “What is the person’s religion?”, presumes that the person has a religion.  Without this presumptive bias, it is much more likely that people will see ‘No Religion’ as a valid response option.

Parents answering for their children – It is usual for parents to complete the census on behalf of their children and to project their own answers when completing the form.  This is especially the case with the question on religion.  Clearly, many children are not consulted about the choice that is made on their behalf, and few are at such a developmental age to make an informed or considered choice.

Frivolous answers – A small number in past censuses have followed a trend to enter joke religions in the hope that they will get reported in the results.  This is a fallacy because all reporting is aligned to the Australian Standard Classification of Religions.  Frivolous choices most likely reduce the ‘No Religion’ count.

A further reason for the likely overstatement is context.  This relates to the placement of the question on religion within the census form.

The religion question is the last in a series of questions relating to a topic that the ABS identifies as ‘Cultural Diversity’.  Immediately preceding questions relate to a person’s birthplace, their parents’ birthplaces, language spoken at home and their ancestry.

As a result, the scene is set for culturally inspired choices of religion.  Most obviously, this would include Judaism, Sikhism or Greek Orthodox.

Less obviously but perhaps more commonly, people of an Anglo-Celtic heritage and/or religious upbringing will choose an associated religion, even though their practices and beliefs no longer reflect the fundamental teachings of that religion.

For further insights from Neil’s analysis of census trends, read the full chapter at Rationalist Society of Australia.